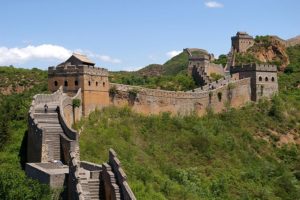 Using light to transmit signals is nothing new. Signal fires and smoke signals have been used for thousands of years. Because light travels incredibly fast signals could be sent from place to place very quickly.

Native Americans and other cultures used smoke signals and the Chinese signal tower system along the Great wall of China allowed warnings of potential invasion by the Mongolians to be sent back to the government long distances of up to 500km in day.

Ships also used semaphore signals and signal lamps to send Morse code between ships in visible distance of each other.

As the limitations of electrical data transmission became apparent in the middle of the 20th century, research into the alternatives began. By 1977 the first telephone traffic was being routed through a fiber optic connection. 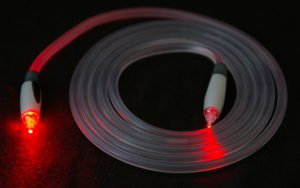 Fiber optics works by send light along glass fiber cables. Data is sent in binary pulses using laser light and the light travels from one end of the cable to the other, bouncing along the internal of the cable through a physics phenomenon known as total internal reflection.

Multiple light signals using different wavelengths can be sent at the same time, which allows for higher bandwidth and full duplex transmission – this is known as multiplexing.

The current maximum bandwidth for fiber optical cables is 10 GB/s.

Due to total internal reflection the cables do not suffer with interference or crosstalk and signal degradation over a much greater distance when compared to electrical cables. 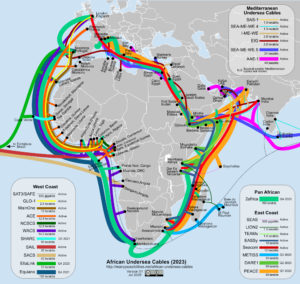 Fiber optical cables now form the backbone of international internet networks, handling most global traffic. Fiber optic cables and can handle huge amounts of data compared to cable networks and have the advantage of only requiring signals to be booster every 100km underwater using a repeater. Fiber optic cables are still vulnerable to damage, especially from shark attacks and ship anchors.

Note: Li-fi is not currently mentioned on the iGCSE specification but it’s an interesting technology so I’m adding it here!

Wi-fi networking in homes and offices is incredibly popular, however it does have a number of disdvantages:

This has meant that alternatives to radio based wireless networks are being developed. One such technology is Li-Fi.

Li-Fi is a technology where data is sent using light from the invisible portion of the spectrum (usually ultraviolet light). This has a number of advantages over Wi-fi as there is no interference between different networks and it is easier to ensure network security by making windows opaque.

It also has a number of advantages in special use areas.

I couldn’t find any so yeah…