learnlearn.uk / IGCSE ICT Home » What is the BIOS?

What is the BIOS?

What is the BIOS? 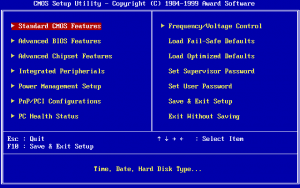 The BIOS is the first piece of code that is loaded when you computer starts up and is a form of firmware.

The BIOS performs the following functions:

A computer will not function correctly if certain devices are not installed or if they have a hardware fault. The BIOS checks each of these components and makes sure they are working properly.

The BIOS also checks the temperature of the motherboard, CPU and GPU. If they are too hot the computer will shutdown in order to prevent damage to the computer. 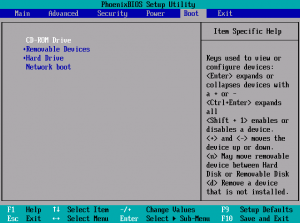 Once all the hardware checking is complete, the BIOS will then attempt to boot an operating system from a storage device. What device it will choose to boot from first will depend on the device boot order.

Like other pieces of code on a computer, the user may wish to update the BIOS firmware. The BIOS is located on a BIOS chip and the process of updating the firmware on the chip is known as ‘flashing’.

The BIOS must be flashed because it is stored on a Read Only Memory  ( ROM) chip. and so you can’t just copy and paste new files to the chip, it has to be flashed as a whole new image.

Benefits of updating the BIOS

Drawbacks of updating the BIOS 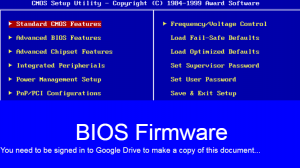 Download the firmware worksheet ( opposite) and reboot your computer.

When you computer starts up again keep pressing the F10 key until the blue BIOS screen appears. Work through the worksheet, filling in the blanks on the worksheet from the information on the BIOS screen.

Once you have filled in the relevant information, reboot your computer again and load this page up to answer the final questions on the sheet.

Create a copy of the attached Google slides document and move it to your topic 1 folder.

Using the information that you gathered in the previous activity, fill out the slides document.