As personal computers began to grow in popularity, so did the number of peripheral devices that could be connected to a computer. Thousands of devices, such as printers, joysticks, mice, keyboards, scanners, etc needed a way of connecting to the pc. Unfortunately this meant that PCs had to support a wide number of devices, each with different methods of connecting to the machine.

Some common PC ports on an older PC.

This created a huge problem:

What was needed was a single standard port that would accept any device and eventually the USB standard was agreed. 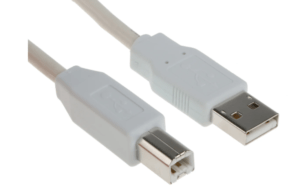 The USB standard established a set of rules by which a wide range of devices could be connected to any free USB port.

This had a huge number of advantages:

As computers became faster and data transfer requirements increased the original USB 1.0 standard (1.5Mbps) became too slow and so never versions (2.0, 3.0, 3.1) have been developed and now USB can transfer data up to 10Gbps, over 1000 times faster than the original specification.

In Europe USB has become such a dominating standard that the EU is even trying to force apple to use USB-C in all their devices.