Step 1 – The user presses a key on the keyboard 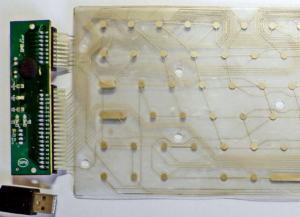 The flexible circuit inside of a keyboard. Click Image for source

The carbon pad on the base of the key hits the circuit board, completing the circuit

Step 2 – The keyboard detects a keypress

The microcontroller in the keyboard detects which key that has been pressed by sending electrical pulses through the circuits running under the base of each key.

Step 3 – The keyboard sends the scan code to the computer

The microcontroller sends an interrupt signal via a USB serial connection (or Bluetooth) to the computer, informing the processer that a key has been pressed together with the scan code of the key(s) that was pressed.

Step 4 – The scan code is converted to the letter/number that was pressed.

Step 5 – The letter is passed to the software 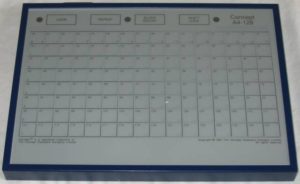 A concept keyboard is similar to a normal keyboard except the the keys do not have any letters on them. The keyboard requires an overlay to be fitted on top of the keyboard to indicate the functionality when pressing the key.

In a restaurant you might have each item for sale on a separate key, together with buttons for total, change, cancel order etc.

Once a server has become familiar with the layout of the keyboard it makes the ordering process very efficient, even for those with limited ICT experience.

The keyboards are more expensive to buy than normal keyboards

If a change of use is required (new items are sold) then you will need to replace the overlay.