Digital film cameras were first invented in 1975 by Steve Sasson, an engineer at Kodak. He designed a prototype for a camera that focused light onto an array of sensor pixels inside the camera. When a photo is taken, photons of light cause a charge to build up on the pixels. After the photo is taken the pixel charge is converted to digital format and an image file is saved. 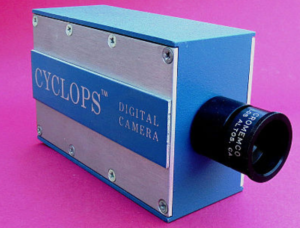 The technology continued to develop in terms of image quality and production costs(especially with the shift to CMOS sensors), however the most crucial development was in sensor size. Sensor (and lens) size continued to shrink and by the mid 2005s the sensors were small enough that they could be fitted into mobile phones.

In 2007 Apple released the the iPhone, with its built-in 2 megapixel camera and this had serious consequences for the digital camera industry. Within 5 years the sale of handheld APS style point and shoot cameras began to fall drastically and within another 5 years most camera manufacturers had cut or cancelled their point and shoot camera sales.

Most sales of discrete digital cameras today focus on niche markets where a mobile phone camera is unsuitable, such is DSLR/Mirrorless Camers for professionals*, action cameras such as the Go Pro and dashcam/security cameras.

*many professional photographers still prefer to use film

Digital cameras and video cameras use a CMOS/CCD sensors to images and videos. This video explains how they work:

Filters are used to control which colors pass through into each pixel, thereby allowing color images to be recorded.

Step 3 – A charge builds up on the sensor

A negative charge builds up in the sensor pixels, the greater the charge the brighter the image

Step 4 – The charges are converted into electrical signals & amplified

The charges are converted into electrical signals and amplified

Step 5 – The analogue signal is converted to digital

The signal is passed through an analogue to digital converter.

The RGGB data is converted into an RGB image format ready for viewing, using demosaicing algorithms.

Digital cameras can usually capture still images and video. Videos are recorded by capturing images a large number of times per second(usually 25 frames per second) and combining the frames into a video format, such as MPEG or AVI. Most cameras include a basic in-built microphone, with the sound data being attached to the video file.

Most cameras include digital image stabilization. The camera uses data from gyroscopic and  accelerometer sensors to detect motion, such as camera shake, and use this data within algorithms to adjust the image output data to reduce blur.

Digital cameras feature a huge number of settings, such as:

Most cameras include basic in-built image editing and management software so that images can be edited or deleted within the camera itself and basic editing, such as cropping, can be performed in-camera.

Most digital cameras, including mobile phone cameras offer the option to save files to either JPEG or RAW file formats. JPEG images are far smaller than RAW files and can be viewed on any device, and as such as the choice for most people. RAW files however are useful for professional photographers where fine image control is needed and are especially useful when taking astro-photography, as these files need special care when processing.

Modern cameras include AI to enhance photo capture, such as using face-recognition to focus the camera on faces and facial-expression recognition to detect when the subjects are all smiling.

AI is also used in post capture for facial blemish removal and noise reduction, among other techniques.